He died a hero 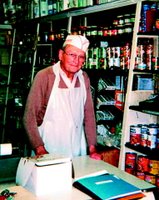 This is the sort of story that gets bandied about a lot in tall tales and urban legends, not to mention books and movies, and it is, as such, something of a delight to discover that it is true, in this case, and impressive to a magnitude that I can not adequately express.

Waldemar Kaminski, who quietly ran a food stand in Broadway Market for more than 50 years, has been revealed to be a self-made millionaire and philanthropist who anonymously gave millions to Buffalo charities and neighbors in need.

He died at home Wednesday night from complications of a long illness. He was 88.

It seems that Mr. (the honorific hardly seems enough) Kaminski had been investing his meager profits in the stock market for decades, reaping modest dividends, and then investing again. This slow but steady process resulted in some enormous capital, when all was said and done. $1,000,000 went towards endowing a pediatric chair at the Roswell Park Alliance Foundation. Another $1,000,000 went towards building a small but lovely park. He also donated extensively to the Salvation Army, the Father Baker Home, and Hilbert College, among others.

And it doesn't stop there. Dozens of people who knew him personally, and could always count on him for help. Hundreds who never met him, but reaped the benefits of his philanthropy. Through it all, Mr. Kaminski toiled merrily along in obscurity, feeling even that the simple and pleasant life he lived was too extravagant to be just.

For he was one who would not, as the saying goes, "look a gift universe in the mouth." His time was spent in fishing, kite-flying and horseplay with his youthful relatives. To simply see people, and the world, and to feel the happiness that can be found therein, was to Mr. Kaminski a gift beyond gratitude. We know this feeling; we have felt it. Chesterton felt it, too.

Hail and farewell, then, to Waldemar Kaminski; requiescat in pace.

[Cross-posted from A Gentle Fuss]
Posted by Nick Milne at 1:45 AM