Note: Don't forget to check out Eric's post just below, and Alan's excellent and engrossing piece just below that one. It was added on Sunday, so it's possible you might miss it. Trust me, you don't want to. 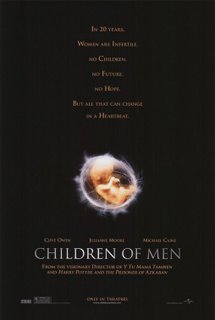 There is a film in theaters now that is unabashedly pro-life - almost to the point of being a punch in the gut to supporters of abortion and euthanasia - but that manages to carry itself with quiet power without mentioning abortion once. That film is Alfonso Cuaron's Children of Men (based on a P.D. James novel of the same name), and, because of the poor job its distributors have done advertising it, it's entirely possible that you may not have heard of it, or if you have, you may have no idea what it's about.

The premise is simple: women stop having babies. That's it. Human infertility is utter, beginning in 2009, and there is no end in sight as 2027 rolls around, in which year the film lays its scene. The impact this has on the world is extreme, naturally, and the film does a good job in capturing this. The very young become celebrities; in fact, the film opens with all of England in horrified mourning upon hearing that the youngest person on Earth (just over 18) has died after doing something stupid (it is always and ever the way, with the young). Quite apart from that, however, the face of the world has been changed significantly by successive acts of terrorism, the collapse of traditional world powers like America and China, and the implementation of functional fascism in such states as remain cohesive.

So it's England, alone, and there's nothing merry about it. There is no joy to be had for the common man. There is no hope for the future. In a very real sense, there is no future. All that can be done is shudder against the wind and wait for the end to come. Never have I seen a nation in despair portrayed so eloquently. It's worth noting at this point, for people who have seen V for Vendetta, that Children of Men does everything politically that VforV tried to, hoped to, wished with all its might to do, but without even trying. That is, fascism and brutality and the soulless state are not what this movie is about, but it hits them out of the park almost as an afterthought.

No, the movie, as I said, is about life, and it's greatly in favour of it. The turning of the tide comes when the film's protagonist, Theo Faron (Clive Owen), a middle-aged office drudge struggling to find a reason to even wake up in the morning is recruited by his ex-wife, now a terrorist leader, to escort a young woman named Kee (Claire-Hope Ashitey) to the English coast, and thence onto a ship that will take her far away from the rapidly-disintegrating island. What's at stake: Kee is mysteriously and undeniably pregnant, and the time of birth is quickly approaching. What follows is epic, and I won't spoil it for you.

There's a lot to unpack in this film, and I hardly know where to begin. It is not too much to say that, when the child is inevitably born, the effect that it has upon the world around it is immediate and extreme. In its birth we see the triumphal return of Significance to a world that had lost all semblance of it. The Ultimate Things burst forth, as ever, and we remember truths that we had forgotten. Elders sing lullabyes to the child wherever it goes, even in an apartment building under siege by the forces of the police state. The soldiers themselves are no less impressed, looking upon this son of man with shock and soul-wrenching, sublime joy, some of them going so far as to kneel before it, crossing themselves. It's a moment of great power.

Elsewhere, other Ultimate Things return. At one point we see a parade of angry Muslims marching through a shattered street in a refugee camp, machine guns firing in the air, green banners waving and a sustained, pulse-pounding chant of "Allahu Akbar" going up like thunder. Such is the majesty of this film, and the crushing barrenness of what has gone before, that I felt like saluting them as they went. Dozens are slain as the film progresses, many in vain, some sacrificially and with that paramount love. A man, shot through and bleeding to death, uses his last ounce of strength to instruct the young mother on how to comfort her crying child, and, this having been successfully done, dies with a smile on his face.

In all honesty, Children of Men is a film of excruciating moments. If there can be a complaint leveled against it (and I suppose there could), it would be that it sacrifices flow for the sake of individual events. But these events - these moments - are so astonishing and heartbreaking that it's difficult to notice. An ante-natal nurse recalls the horror she felt at suddenly noticing that no new appointments were being made. A terrorist, having already been seen to kill men in cold blood and for no good reason, describes how he wept like a little girl after simply looking at the baby. A minor lord lives in sybaritic luxury in his "ark of the arts," into which the treasures of the world have been collected as best as could be managed, battling the uselessness of his endeavour with drugs and ignorance. Pink Floyd's inflatable pig floats outside his window. He raises a toast to it, but it is a sad one. Looking upon the slightly damaged form of Michelangelo's David, he comments bitterly that he couldn't save La Pieta - that is, the archetypal image of Mother weeping for her fallen Son - as it had been smashed to pieces before he could get to it. It might be the most crucial thought of the film, at least from a Catholic perspective.

Cuaron directs with monstrous skill. Bouts of conversation and depression are interspersed with tense set pieces in which destruction and collapse are always in evidence. Good men are cut down by bastards. Good women are betrayed. Barbarians scream and hurl molotov cocktails and rocks. The scene in which the apartment building comes under attack is part of a thirty-minute sequence, set in the ruins of a small coastal town and filmed in a single, breathless take. This futuristic England is awash in advertisements and television sets, all of them blaring angry warnings against harboring illegal immigrants, or avoiding fertility tests. Also prevalent are advertisements for the drug Quietus, the government's "solution" to the crushing ennui of this brave new world. Here is euthanasia portrayed in all of its clinical, lying horror, and the film's characters will have no part of it, if they can help it. The drug's slogan: "You decide when." Take that one to the bank, folks.

Anyway, to make a long story short, I recommend this film without hesitation or qualification. I will warn that it does contain cursing, drug use, extreme and realistic violence, scenes of great heartbreak and tragedy, and any number of other things. What it doesn't have, however, is salaciousness, frivolity, sex scenes, or any truck whatever with the culture of death. Countless people die, it is true, but many of them do so with the hope of helping bring an infant safely into the world. Maybe there's something to that.

P.S. The film has many striking and, I'm forced to assume, purposeful evocations of T.S. Eliot's "The Waste Land." Those of you who are familiar with that work might wish to read it through before seeing the film for added effect.
Posted by Nick Milne at 1:53 AM

An excellent assessment of an excellent film. Part of the deep power of the film is the extent to which it does not make ideological statements, but instead portrays the effects of a dying civilization. It allows the viewer to connect the cause-and-effect dots between the psychological effects of an empty future with the manifestations of those effects as portrayed in the film.

As a point of interest, I felt the film ended in a deeply tragic way. Yes, everyone in the film was moved and affected by the miracle of life, just as only starving people can fully appreciate the miracle of a good meal. However, it is a bittersweet miracle, the last gasp of a dying world. Even if there were a hundred similar new babies, it would not be enough to save a civilization. The human race would, in a hundred years time, be reduced to a tiny group of desperate, primitive people trying to scrape out survival among the ruins of their parents.

If anything, the film represents the power of irrational hope or (as Chesterton calls it) irrational optimism. It takes very little rationality to recognize that this miracle is a weak postponement of the inevitable. But the new child becomes the tenuous handhold for the future of humanity and (more importantly) a symbol to those who still live that all is not in vain and that maybe... just maybe... tomorrow will be better than today.

Mmm...interesting. I have not seen the film. I was persuaded from seeing it by the bad reviews it was given. These reviews stated that the director butchered the pro-life message, essentially eliminating it from the movie, and did a great disservice to PD James story.

Instead (I read) the movie substituted political cliches related to the directors disagreement with the War on Terror for the more universal themes in the book.

I hope it is as good as you say, and not the garbage I read it was.

Certainly many of the principles in the movie are well-known supporters of abortion. Did they really make a "pro-life" film?

Well, there is some truth to that, Don, but not necessarily to the extent that it's problematic. I think most reviewers would focus on the fascist elements of the film because they are a prevalent and pervasive part of the film's world. The creation of a realistic fascist state basically demands this, and it would be easy to be tricked into thinking that this is the point of the movie based solely on how much time is spent on it.

The pro-life messages are there, and they are powerful, and they are subtle. It takes more patience to weed them out than most reviewers - particularly those who themselves have strong opinions about the War on Terror - might be willing to expend.

Of course, I may just be reading what I want to see into it. My advice is to see the film yourself, for it really is very good, and come to your own conclusion. There's a lot of stuff in this one that inspires intense personal reaction, so results, as they say, will vary.

I hope you enjoy it, anyhow.

I was so irritated by King Arthur, that I wasnt going to watch anything else with Clive Owen, I may give this a chance, though.

Kyro, Clive Owen is an excellent actor, King Arthur notwithstanding. I plan to see this film this weekend.