Yesterday was the solemn feast of the Epiphany.
The day the Kings came to town.
I’ve heard many a sermon on this day covering the historical, symbolic, and spiritual meaning of the Kings and their gifts but my favorite was the one that included the line, “You don’t think Daddy would send his Boy to camp without any money do you?”
The 12th day of Christmas.
A day mixed with joy and sadness because it is the last day of the Christmas feast.
Over so soon?
Today is the day I unplug my exterior Christmas lights (a sigh of relief from my neighbors – yea I light it up – not so you can see it from space, but big).
It is the day I give my wife one last present - earrings usually or some golden bling of a thing.
The tree will last another week.
The beginning of Ordinary Time.
During Chesterton’s day it was not called Ordinary time for if it had been I’m sure he would have had something to say about that. Like ‘How can time be called ordinary after the Incarnation.’ or ‘The last thing one might call orthodoxy is ordinary.’ Pre Vatican II every season had a name or meaning that would help the faithful focus on the prize. Yes, I know Ordinary in this use does not mean plain but ordered or numbered time. I have some misgivings though that the majority understand it as that. Even if we all knew its true meaning it still sounds like treading water.
This Christmas gone and folded into another lovely memory as each passing day wipes clean the crazy family moments. Big families can lead to big crazy which leads to big laughs. 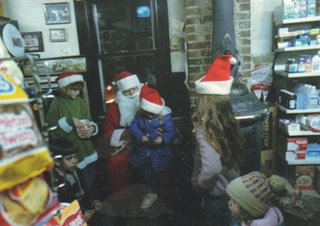 So today we begin our steps, in an ordinary way, toward Lent - preparing to prepare.
Posted by Alan Capasso at 6:56 PM

Huh. I actually didn't know that about ordinal days, which is pretty sad since I've gone to Catholic elementary and high schools. You definitely have a point there, and a very interesting and worrying one.

Never Ordinary around our place. You might enjoy reading our thoughts on the Epiphany and the Christmas aftermath.