THE FIRST EDICT OF KING STEVE 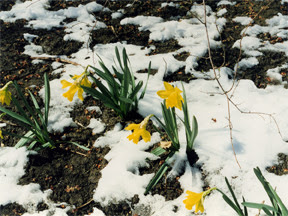 It had been a long, hard, oppressive winter. The likes of which had not been felt for a generation. In the neighborhood, where Steve lived, there was one death and twelve new lives begun each blamed on the confinement of that winter. Snow mobile ‘gangs’ rumbled through at all hours of the day on the streets and through unfenced yards as if the snow united all into a mile square playground. Schools and businesses closed for days at a time. It was the kind of winter that made grandparent’s say ‘this used to happen all the time when I was young.’ Utilities bills had soared to the point where many would be paying on them through August. The only color that had pierced the white and gray landscape was that of the snow suits worn by the children. The blue, red, orange, teal and purple of the marshmallow shaped people that parents forced outside to relive their entertainment duties. Their cartoon voices were held close to the ground by the increased gravity of coldness like a half remembered song being hummed by an old man. These were the occasional high notes and sweet cords played in the otherwise grim score that droned through the lives of the town.

When the first Robins were spotted there was still a foot of snow on the ground. The snows began the day after Thanksgiving and continued through the first week of March stopping on occasion as if only to catch it’s breath. Few trusted the promise of spring; it was like watching a middle aged man trying to get back in shape, so he could date again. The start was fitful, painful, almost humorous, but it was determined. It would not be stopped. The question was if it would get in top shape before summer or just shed a few pounds.

Steve let out a long stuttering breath as he stood in his yard, now so many square feet of mud and slush. Stubborn snow still clung to the edges of the dive way, more black than white. He did not realize the unrelenting pounding the winter had inflicted on him until this unique day when the temperature toped 65 degrees. He could breathe again without being slapped. His winter beard could be shaved. His quilt lined wool pants and lucky scarf could be put away. A breeze came up and he instinctively flinched but relaxed and smiled when he felt its warmth.
‘The breath of God’ his mother used to call the first wind of spring. A car drove by and he heard the sound of the manhole cover, finally unfrozen, clang back and forth. Out of the corner of his eye he spotted a hint of green. The woodpecker, on his annual visit, hammered out a message of love.

Although there were still many with frozen hearts Stephen stepped upon on the exhausted remnants of his wood pile and falling on his knees he cried out in a loud voice officially calling an end to winter, and let the music of the cheering throngs, fill him with their undying gratitude.


Happy Spring everyone!
Posted by Alan Capasso at 8:01 PM

That was a breath taking story. Are there more of it? Thank you so much for the post. I really enjoyed it. Happy Spring!

Dear Friends, I'm Marco Sermarini, Manalive, chiarman of Italian Chesterton Society. I've posted your blog link on our blog http://uomovivo.blogspot.com.
I like your blog about Our Man, Gilbert, and his best friends.
So feel free to post our link on your blog.
Chestertonian friendship will change the world, I'm sure!
Our mailbox il societachestertoniana@hotmail.com. Best wishes

emmie,
thanks for your kind words. yes there are more and they will pop up from time to time.