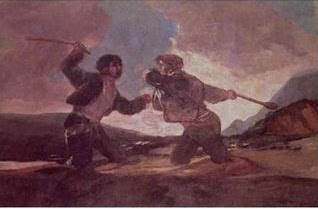 This Goya painting is titled “Dual with clubs”. It was one of his Black Paintings, a product of his dark period after the Napoleonic Wars and the turmoil of the Spanish government. “He had an acute awareness of the panic, terror, fear, and hysteria that was running rampant through Spain at the time”. Some think these paintings show that his spiritual battle ended in the belief that some men are so far into the lie that they can not be brought back to the truth, thus Goya developed an embittered attitude towards humanity. This painting is of two men determined to beat each other to death and it is so senseless because as they swing away they are both knee deep and sinking in quick sand. They could save each other but no, in this battle both will die and nothing will remain. They are mean and stupid it is not their meanness that makes them dangerous but their stupidity. Goya feared stupidity especially armed stupidity. There is nothing you can do about it and you can not appeal to it.

This belief, that some cannot be saved, is an easy one to fall into but it was not the case with Goya. Goya was painting warning signs. This one is saying that above all that this belief, that some cannot be saved, is not a truth. What is the truth is that you or I, in some instances, can not bring them to the Light. Only the Holy Spirit can do that. Some times He uses us to help and sometimes that job goes to another. It is when we cannot do it that brings us to despair but that is only wounded ego. And sometimes people just refuse to go no matter what we do, as told in C.S. Lewis’s The Great Divorce.

Goya’s warning signs were painted direct to the walls of his house where he was reminded every day of what he was up against. They are loud statements about what’s wrong with the world. But unlike what the historians tell us of his later days these painting are proof that he was not in complete despair. An artist in complete despair and hopelessness does not work – to do art or any great creative act one must have hope. He fought the world with the only weapon he had – pigment.

If this belief, that some cannot be brought back to the Light, were true we would not now know of such people like St. Augustine, St. Francis or C.S. Lewis and Chesterton for that matter.

Chesterton used words to do this battle. I am sure that after reading H. G. Wells’ Outline of History, Gilbert could have easily said, “This is what the world has come to and there is nothing I can do about it”. Instead he gave us Everlasting Man. This along with What’s Wrong with World he created two huge warning signs telling us that the ‘bridge is out up ahead – turn back now’.

Both Goya and Chesterton did not pick up clubs and bludgeon the enemies of truth, Goya’s paintings were never meant to leave his house they were for him and his friends and Chesterton’s writings were never an attack as much as they were a powerful flashing light house in the fog so that we may not crash onto the rocks. He gave us the truth in an uncompromising manner or as they say over at Catholicity “get the facts decide for your self”. Chesterton also debated the “dark side”.
The one thing that marked the Chesterton/Shaw debates - they were civil. Civility is now considered a weakness not a virtue.

I mention all this because Tammy wants to escalate our newspaper fight to one of dual with clubs. She wants to convince me that there are circumstances where abortion is hokay and I should leave her alone about my stance that, no there are not. She made an excellent attempt to goad me into a personal meeting. She used the playground technique of ‘You are hiding behind your keyboard so meet me behind the gym after school or I’ll tell everyone you are a coward’. After several very uncivil types of emails form her, I at first said yes then I realized I left the playground a longtime ago and her opinion of me matters not. I also remembered what my Dad once told me, “Never go out of your way to be with angry people.” I then declined the meeting.

I felt bad about that because maybe I was chosen to be the one to bring her to the truth and in fact I was a coward. But after reading her latest Op-Ed piece I knew I was not the man for the job. She is in too deep and I do not have enough rope to throw her. She has written several times that Israel has no right to exist and in her inverted reality that in fact Israel is the aggressor not the victim in the mid-east conflicts. Now in her latest piece she wants us to believe that the attacks on 9/11 were a CIA plot, possibly in conjunction with Israel, to convince us to go to war with the enemies of Israel and that radical Islam is not the real problem.

She begins her piece recounting the 1999 movie “… The Matrix is based on the premise that everyday life is a dream and that the real world – one where comatose humans serve as energy sources for alien robots – is a closely guarded secret. Keanu Reeves’s character discovered the truth and was offered a choice: take a pill and forget everything or see “just how far the rabbit hole goes.” This week I am offering readers a similar choice: skip over today’s column or venture with me down that rabbit hole.”
(OK never mind that they were not alien robots but a machine of human design. Or as GKC said, “We will soon become slaves to our own inventions.”)

This is the pill of reality she wishes to give us:
She recounts a 45 year old declassified document call Operation Northwoods which states in part how the CIA could launch terrorist type attacks on the US and blame the Cubans thus giving us a cause to go to war with them. She twists and turns from there to involve both the CIA and the Israeli government in the 9/11 attacks, proof being that between 8/26 and 9/11 some Israeli citizens “sold short” 38 stocks, some of which were airline stocks. There is the profit motive. Also that there is evidence that Israel is spying on the US. She thinks that The Israeli government knew that the 9/11 attcks were going to happen but did not tell us. Maybe they did but no one listened, like no one listened to our own FBI on the likelihood of such an attack.

Now Tammy may not know or ignores a couple of facts: First, that there are people in the U.S. government whose 9-5 job is to come up with scenarios that involve how to start a war, how to fight a war and how to win a war. There are no rules in this office and every idea is permissible, these “plans” are then forwarded to higher-ups. Second is that the US government did not implement Operation Northwoods.

Many paragraphs on current conspiracy stuff follows then she ends with:

“Former Israeli Prime Minister Benjamin Netanyahu characterized the 9/11 attacks as “very good”. Moments later he added, “well, it’s not good, but it will generate immediate sympathy.”
Sympathy and justification for unprecedented U.S. aggression against countries that don’t recognize Israel.
So when another “Fort Dix Six” are nabbed for an alleged terror plot, or the next time a “pro-Western” official is assassinated in Lebanon, a church is bombed in Gaza or Iraq, or a shoe bomber” is arrested on an airplane remember the deception of our own government and whose interests it serves to keep fomenting the bogus “War on Terror”. Ask yourselves if radical Islam is the real enemy.”

I’m sure she will soon have proof that the shooters on the grassy knoll were Israeli operatives.

Tammy believes I am out to discredit her but with more Op-Ed pieces like her recent one I don’t have to – she is doing a fine job of it all by herself.