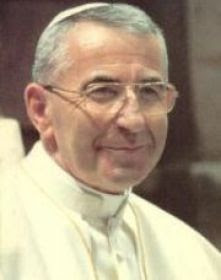 Here's something of a rare gem for you. It's a trifle long, but it's certainly worth the time.
As we all know, Albino Luciani (Pope John Paul I) died very soon after his election to the throne of St. Peter; so soon, in fact, that he was unable to produce any documents as pope, magisterial or otherwise. His election was one of the swiftest in history, however, and his smiling face was a welcome one to the people of a weary world. There was something passionate and real about him that delighted even as it intrigued, and it is a great loss to us indeed that he was taken so soon.
What, then, survives him besides his memory? Various lesser-known works are available, but the most famous of them all is a series of letters that were never answered. This may sound bizarre, and on the surface the description is accurate. Still more bizarre, even, given that the reason for this lack of reciprocity was because the addressees were all either long-dead or figments of fiction.

Illustrissimi, first published in 1976, is a collection of letters written by Luciani to famous historical figures and characters from art and literature. The value of such an exercise is enormous, both as a delightful hobby and as a way to collect one's thoughts. Samuel Johnson famously (or so I would have it) described the merits of writing as a way to "enable the mind to detect its own sophisms;" writing to someone, even someone who can not answer, as such, enables such detection and more.

The volume is a thick one, and it must be read in full to properly appreciate its merits. There are dozens of letters to be examined and considered, addressed to figures as diverse as Mark Twain and Pinochio; Empress Maria-Theresa of Austria and St. Therese of Lisieux; Aldus Manutius and the members of the Pickwick Club; St. Luke the Evangelist and Jesus Christ.

There is also - which concerns us the most - a letter to one Gilbert K. Chesterton, written in 1971. That letter follows in full.

On Italian television, these past months, we have seen Father Brown, that unpredictable priest-detective, a typical creation of yours. Too bad Professor Lucifer and the monk Michael did not also appear. I would have been happy to see them, as you described them in The Ball and the Cross, traveling in an "airship," seated side by side, Lent next to Carnival.

When the ship is over St. Paul's Cathedral in London, the professor hurls blasphemy at the Cross. And the monk says: "I once knew a man like you, Lucifer.... This man also took the view that the symbol of Christianity was a symbol of savagery and all unreason. His history is rather amusing. It is also a perfect allegory of what happenes to rationalists like yourself. He said, as you say, that it was an arbitrary and fantastic shape, that it was a monstrosity, loved because it was paradoxical. The he began to grow fiercer and more eccentric; he would batter the crosses by the roadside.... Finally in a height of frenzy he climbed the steeple of the Parish Church and tore down the cross, waving it in the air, and uttering wild soliloquies up there under the stars. Then one still summer evening as he was wending his way homewards, along a lane, the devil of his madness came upon him with a violence and transfiguration which changes the world. He was standing, smoking, for a moment, in front of an interminable line of palings, when his eyes were opened. Not a light shifted, not a leaf stirred, but he saw as if by a sudden change in the eyesight that this paling was an army of innumerable crosses linked together over hill and dale. And he whirled up his heavy stick and went at it as if at an army. Mile after mile along his homeward path he broke it down and tore it up. For he hated the cross and every paling is a wall of crosses. When he returned to his house he was a literal madman.... He broke his furniture because it was made of crosses. He burnt his house because it was made of crosses. He was found in the river."

Lucifer was looking at him with a bitten lip.

"Is that story really true?" he asked.

The monk's conclusion, which is also your own, Dear Chesterton, is correct. If you take away God, what remains, what does mankind become? In what sort of world are we reduced to living?

Yes, but this vaunted progress is not everything that was hoped: it also brings with it missles, bacteriological and atomic weapons, the current process of polution: things which - if provision is not made in time - threaten to bring catastrophe on the whole human race.

In other words, progress with human beings who love one another, considering themselves brothers, children of a single God the Father, can be something magnificent. Progress with human beings who do not recognize God as a universal father becomes a constant danger. Without a parallel moral process, interior and personal, that progress develops, in fact, the most savage dregs of mankind, making the human being a machine possessed by machines, a number manipulating numbers, "a raving barbarian," Papini would have said, "who instead of a club can wield the immense forces of nature and of mechanics to satisfy his predatory, destructive, orgiastic instincts."

I know: many people think the opposite of you and of me. They think that religion is a consolatory dream: it is supposed to have been invented by the oppressed, imagining a non-existent world where they later will recover what is stolen from them today by their oppressors; it is supposed to have been organized, entirely for their own advantage, by those oppressors, to keep the oppressed still under their heel, and to lull in them that instinct of class which, without religion, would impel them to struggle.

It is useless to point out that it was precisely the Christian religion that fostered the wakening of the proletarian consciousness, exalting the poor, announcing future justice.

Yes, they answer, Christianity awakens the consciousness of the poor, but then it paralyzes it, preaching patience and replacing the class struggle with faith in God and gradual reformation of society!

Many think also that God and religion, directing hopes and efforts toward a future, distant paradise, alienate man, prevent him from fighting for a more immediate paradise, to be achieved here on earth.

It is useless to point out to them that, according to the recent Council, a Christian, precisely because he is a Christian, must feel more committed than ever to fostering progress, which is for the good of all, and to supporting social advancement, which is meant for everyone. The fact remains, they say, that you think of progress for a transitory world, while waiting for a definitive paradise, which will not come. We want paradise here, as the end of all our struggles. We already glimpse its rise, while your God, by the theologians of secularization, is called "dead." We agree with Heine, who wrote: "Do you hear the bell? On your knees! They are carrying the last sacraments to God, who is dying!"

My dear Chesterton, you and I do indeed fall on our knees, but before a God who is more alive than ever. He alone, in fact, can give a satisfying answer to these three problems, which are the most important for everyone: Who am I? Where do I come from? Where am I going?

As for the paradise to be enjoyed on earth, and only on earth, and in a near future, as conclusion of the famous "struggles," I would like people to listen to someone much more gifted than I and - without denying your merits - also than you: Dostoevsky.

You remember Dostoevsky's Ivan Karamazov. He is an atheist, although a friend of the devil. Well, he protests, with all his atheist's vehemence, against a paradise achieved through the efforts, the toil, the sufferings, the torment of countless generations. Our posterity happy thanks to the unhappiness of their forebears! These forebears who "struggle" without receiving their share of joy, often without even the solace of glimpsing the Paradise emerging from the Inferno they are going through! Endless multitudes of the maimed, the sacrificed, who are merely the humus that serves t omake the future trees of life grow! Impossible! Ivan says, it would be a pitiless and monstrous injustice.

And he is right.

The sense of justice that is in every man, of whatever faith, demands that the good done, the evil suffered, be rewarded, that the hunger for life innate in all be satisfied. Where and how, if not in another life? And from whom if not from God? And from what God, if not from the of whom Francis de Sales wrote: "Do not fear God in the least, for He does not want to do you harm; but love Him greatly, because He wants to do you great good"?

The one that many are fighting is not the true God, but the false idea of God that they have formed: a God who protects the rich, who only asks and demands, who is envious of our progress in well-being, who constantly observes our sins from above to enjoy the pleasure of punishing them!

My dear Chesterton, you know as well as I, God is not like that, but is at once good and just; father also to prodigal sons; not wanting us poor and wretched, but great, free, creators of our own destiny. Our God is so far from being man's rival that He wanted man as a friend, calling him to share in His own divine nature and in His own eternal happiness. And it is not true that he makes excessive demands of us; on the contrary, He is satisfied with little, because He knows very well that we do not have much.

Dear Chesterton, I am convinced, as you are: this God will become more and more known and loved, by everyone, including those who reject Him today, not because they are wicked (they may be better than either of us), but because they look at Him from a mistaken point of view! Do they continue not to believe in Him? Then He answers: I believe in you!

Interesting stuff. This brings the number of popes who have openly engaged Chesterton in some way to four (Pius XI, Pius XII, John Paul I, Benedict XVI), so far as I know; if you can think of any other instances, we would very much like to hear them.
Posted by Nick Milne at 12:20 AM

This old Baptist Preacher Boy, does enjoy Chesterton and calls him a brother in Christ. Chesterton makes me think and i am better for it. His Theology is simple: God Loves us in spite of ourselves. This one great idea binds all believers into one family of Christ Jesus.