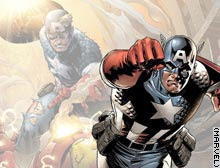 When I got bumped to third shift I knew that would put me a little out of touch with the news or at least somewhat behind the curve. But why didn’t anybody tell me that Captain America was killed off because he became irrelevant, "He hasn't been living in the modern world and the world does move," says Marvel Editor-in-Chief Joe Quesada.
Gilbert would question that logic.

But I did notice that Bill O Rielly has finally gone insane with his support for torture.

Although there are too many quotes from Chesterton on insanity to reprint here I could not find a Chesterton quote on our modern tendency to kill off cartoon characters. I only feel that this should not happen - it does not fit the fairy tale model, “Fairy Tales are more than true; not because they tell us that dragons exist, but because they tell us that dragons can be beaten.” In fairy tales dragons DON’T beat the prince. If a cartoon character loses his or her “relevance” then, like in the past, they should just not show up one day, like Calvin and Hobbs or Zeus.

O'Reilly's been borderline insane for several years, and not just about torture.

You really HAVE been behind the curve!