I'm pushing a mighty thick envelope even to be posting anything at all right now, so don't go into this with high expectations. It has now been thirty-six hours since I last slept (during which sleep I slept for only four hours, which was itself the first sleep after the mere two hours which I got between Friday and Saturday), and reality is beginning to reorder itself in that gentle way that it does. I only wish I had the wherewithal to write right now, because this is the sort of mental twilight in which my best material suddenly bleeds through. I've been putting together notes for a meticulously-researched reverse hagiography of a David Bowie song in short story form, but somehow this just doesn't seem like the time for it, unfortunately.

Mark Shea goes berserk, but in a good way that we can all totally dig. There's fisking and exasperation and measured restraint galore, here, and it's worth every line. The experience reminds me of a line from Maisie Ward's Gilbert biography, wherein are described some of the skeptical/socialist/etc. pamphlets and books that were left, in crumpled and note-splattered condition, lying hither and yon about the Chesterton manse. To paraphrase: "They had a refuted look to them."

Which Archbishop said this? What brought it about? Was the response a scandalised gasp, or a rugged cheer? Well, there's only one way to find out, and that's by clicking this here link. Warning: link contains candor!

The modern grasping for the realities of the divine through ersatz mythologies continues unabated, and some familiar symbols and heroes are on their way back. There are many of a certain generation for whom the sight of this image will produce a little frisson of glee, curious and tacky though the mythology of the thing may be: 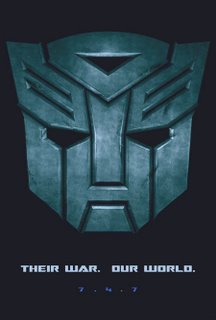 And of course, to join the ranks of The Gift of God, the Coming of Age and the Triumph of the Will comes The Lush in the Robotic Suit: 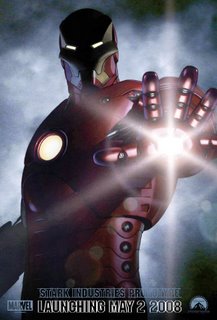 Be sure to click on each image for nicer, larger versions. If you're a fan of the dastardly Decepticons rather than the admirable Autobots, however, then the poster you'll want to see is here.

Those of you who stand rapt and shivering in the dark grace that Flannery O'Connor championed (as mentioned in a recent round-up) may wish to witness the latest photographic efforts of Gerald at Closed Cafeteria, which are considerable efforts indeed. To see the Holy Spirit Descending so triumphantly in blood, fire and shadow is truly thrilling, and is not something that we frequently get from a man taking a picture at his local beach.

To close out the links on a dolorous note, as we have been known to do, it is worth mentioning that fellow Chestertonian blogger Rod Bennett has suffered the loss of a friend of long standing, and is requesting prayers for his family and for the repose of his soul.

And finally, of course, don't forget the latest from Alan Capasso, which was technically posted yesterday, by EST standards, but is nonetheless as fresh and new as that moisture that collects on stuff outside in the morning hours sometimes.
Posted by Nick Milne at 12:06 AM