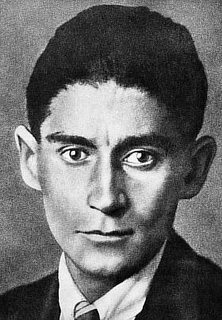 Today's round-up is dedicated to the legendary Czech/Jewish writer Franz Kafka, who lived a hard life in many ways and died terribly for his troubles. There is much in Kafka for our readers to admire, if they are not already doing so, and you may begin your admiration with the goodly selection provided here. Those of you able to read German will do well to note that the website's main function is to make Kafka's works available to the public in their original German manuscripts. Those wishing to hear what novelist Vladimir Nabokov (Lolita; Bend Sinister) has to say about Kafka can go here; those wishing to read a selection of Kafka's journals can go here. This latter project is particularly fun, as it contains delightful prose images like this:

"Beside me on the return trip from Raspenau to Friedland this stiff deathly man, whose beard hung down over his open mouth and who, when I asked him about a station, made a friendly turn toward me and gave me the liveliest information."

It certainly seems the sort of thing that Gilbert would notice, and of course mention. Kafka himself was not silent on the subject of Gilbert, in fact, saying, "he is so happy! I can almost believe that he has found God." Amen, Franz.

Lastly, a truly excellent Prague monument to Kafka can be seen here.

We have good and bewildering news out of Ireland, where a construction worker digging up an old bog happened to discover by pure and astonishing chance a well-preserved medieval book containing copies of some of the Psalms. The book has been dated as being 800 to 1000 years old, and is of incalculable value to any field that might conceivably have an interest in it. How it survived in the swamp for all this time is a mystery, as is what it was doing there in the first place. And, of course, the manner of its discovery is certainly fortuitous; the slighest extra effort on the workman's part in either direction could have either left the book hidden or destroyed it utterly.

The thing that really grabbed me about this story is that the book was open when it was found, and, what's more, it was open to the highly topical and relevant Psalm 83. The text of that Psalm follows, in part:

1 Keep not thou silence, O God: hold not thy peace, and be not still, O God.
2 For, lo, thine enemies make a tumult: and they that hate thee have lifted up the head.
3 They have taken crafty counsel against thy people, and consulted against thy hidden ones.
4 They have said, Come, and let us cut them off from being a nation; that the name of Israel may be no more in remembrance.
5 For they have consulted together with one consent: they are confederate against thee...

13 O my God, make them like a wheel; as the stubble before the wind.
14 As the fire burneth a wood, and as the flame setteth the mountains on fire;
15 So persecute them with thy tempest, and make them afraid with thy storm.
16 Fill their faces with shame; that they may seek thy name, O LORD.
17 Let them be confounded and troubled for ever; yea, let them be put to shame, and perish:
18 That men may know that thou, whose name alone is JEHOVAH, art the most high over all the earth.

Witness - if you dare! - two examples of a Catholic blogger reverting to Fundamentalist Protestantism (or... something) when the going gets tough. An improperly-shaded banner in a local Church is a sure sign of its apostasy! A traditionalist website is deceitfully ascribing gnostic-sounding quotes to John Paul Magnus! Gilbert editor Sean P. Dailey had this to say:

One of the benefits of belonging to a religion with unbending dogmas is that with those dogmas comes a surety that allows you to laugh at yourself, even if the butt of the jokes is a beloved Pope, and I bet that JPII also would find the site funny and would be perplexed by Tomko's umbrage, the source of which is nothing but damnable pride. "Angels fly because they can take themselves lightly," Chesterton wrote, while "Satan fell by the weight of his own gravity."

There's been something of a meltdown in Mark Shea's comboxes about this issue, too. People are so intense and weird, often at the same time.

The triolet contest at Enchiridion has come to an end, and it is now time to vote. Please feel free to head over there and vote for whichever submission you feel is worthwhile. If it's one that was authored by someone's whose words you're reading right now, so much the better. 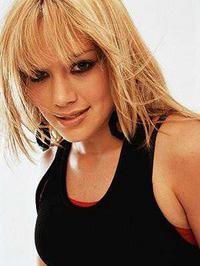 Those of you wishing for a light-hearted excursion would do well to read this brief narrative (my own, as it happens) of what happens when a single agent of the medieval past comes into contact with the full force of the modern aesthetic. The answer: a riot; an understanding; a brush with celebrity (Hilary Duff!). I have struggled with whether or not the whole affair really qualifies as being "Kafkaesque" or not - indeed, I thought of it on the way home, to shake myself out of the experience, if anything - and I am still not certain that it does. It's extraordinary, certainly, but hardly mundane. As there are few things that bother one so as when someone applies the phrase "Kafkaesque" to some circumstance to which it really does not apply, my concern about this is perhaps worthwhile.

Speaking of misassigning Kafka, when I said at the beginning that this round-up was dedicated to him, I didn't mean that it was all going to be about him, but rather that it's just being done in his name as a sign of respect, or something. I should perhaps have made been more clear about this, for it's possible that many of you who have now read this far feel somewhat betrayed.

In any event, these round-ups have been something of an experiment to see how best to bring more varied content to the blog. I could easily split them up into individual posts for each topic, if this were a more favourable idea, but I must confess that I really have no conception of how popular the round-up format is in the first place, or whether the variety of its content is too varied, not varied enough, etc. I encourage you to comment on this below, if you would be so kind.
Posted by Nick Milne at 4:17 AM

Did Kafka know Chesterton or did he comment on him from reading his work?
I like your combined topic box, bc they're easy to skim and then note topics to pursue....ie:
the Kafka journals.
Lily

I don't think they ever met personally, unfortunately, though imagining the meeting produces some pretty neat mental images. I'll have to do a search to see if Gilbert wrote anything about Kafka, in fact.

I think your efforts in the round-up blogging (or agglomerations, as I prefer to call them) are rewarding in their breadth and potential for depth. That is what you may call something of a shotgun approach, where you spread so far or so wide so that any reader may find something that piques their own interests. Time and patience permitting they can use the links as a starting point to do a little digging. At least, for my part, they're a nice read.

Yes, the round-ups are excellent.

Readers: My apologies for not posting yesterday. The day got away from me. I had an early morning appointment, then the evening was occupied with a birthday party for my father and youngest son.