From the scathing pen of ages past springs a wonderful account from St. John of Damascus of the pseudo-Arian heresy of the false prophet "Mamed;" what we would today call Islam. It was at the point of this reference to Mahamot and the Koran, with particular regard to the final sentence, that I knew that here indeed is a true gem:

And he says this, that when Christ went up into the heavens, God questioned him, saying, “O Jesus, did you say that ‘I am the Son of God and God’?” And Jesus, they say, answered, “Have mercy on me, O Lord; you know that I did not say (that), nor am I too proud to be your servant, but men who have turned aside wrote that I said this word and lied about me, and are wandering.” And God, they say, answered him, “I know that you did not say this word.”And many other astonishing sayings in this same writing, worthy of laughter, he boasts God sent down to him.

There is no sugar-coating here, I say to you. This was an age before sugar. Many skeptics and anti-clericals look back at the Early Fathers as "jerks," I suppose we could say, for the heinous crime of daring to dismiss heresy as the foolishness that it is. Irenaeus is moved to open and mocking satire at one point in his dealings with the claims of the old heresiarchs; who could expect less from John of Damascus? 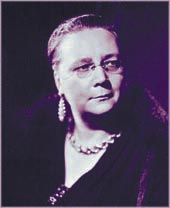 To follow up on Monday's link to the myth of religious tolerance we bring you the very last word in brazen, name-taking majesty, courtesy of the marvelous Dorothy Sayers:

We offer a hat-tip to Kathy Shaidle for that one. What's more, if your tolerance for tolerance is still rather high, feast your eyes upon this monstrous dialogue in the old high style, in which Silvius goes to bat for the Big T, and is consequently eviscerated by the noble Memnon. As always, of course, it is heavily informed by Gilbert.

We must stop worrying about whether or not our actions hurt other people, and start worrying about whether or not those actions help other people. To predicate one's life on merely avoiding harm to others is not as selfish as one could be, but is selfish nonetheless. It is no longer sufficient for real men to concentrate on merely not taking; they must now turn to actually giving.

And finally, we hope you will join Nancy Brown at the American Chesterton Society's Blog in offering prayers for young Lucy - the daughter of a member of the Gilbert staff - who has fallen seriously ill. Holy Innocents, pray for her.
Posted by Nick Milne at 12:26 AM

I've just discovered that Eric posted about the same John of Damascus thing at his own blog, though he found it somewhat more circuitously than I did. Anyhow, the "coincidental" appearance of this item on both blogs could be considered Sinister, I suppose, but perhaps should not be.

Of course it's sinister! You're lifting material from my blog and not giving me credit! (smile)

I'll get over it. Just keep up the great posting.