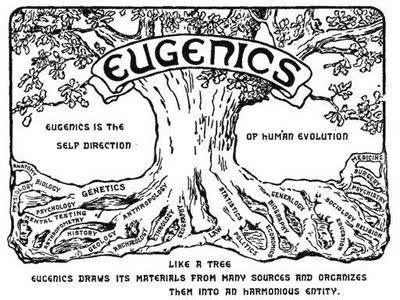 In the early 1900's, the Progressives in Wisconsin called for mandatory sterilization of the "feebleminded."

At that time, the Progressives were all Republicans. The Catholic Bishops rallied the troops--and since then, the Democrat party has dominated Wisconsin elective offices. "

True, forced Sterilization of the of the mentally disabled happened in more that half of the states in this country up to the early-mid sixties. The rest at least thought about it or did it without anyone knowing.

Not sure why he mentioned Democrats and Republicans the split is pretty even in the states that practiced this act. Heavy on the Democrat side in the South.

It tried to inform the public this was a good idea with such quotes as:

"An animal breeder, if he took the time to study our technique in perperuating the race, would likely shudder and use strong language. He knows better that to permit his scrub stock to out breed his best blood lines on a two-to-one basis.
In the past we have made (and still making some half-hearted stabs at correcting the imbalance in our birth rates. The use of contraceptives has been urged to help bring the birth rates into balance. Yet contraceptives have back-fired on us. Generally speaking, they have been accepted only among the class of persons who represent our best mental stock." (emphasis mine)

The last quote was the basis for the movie Idiocracy

The Eugenics Board will order an operation:

1. Where it is to the best interest of the patient, mentally, morally, or physically.

2. When the operation is for the public good.

3. Where the operation has been requested by the guardian of a mental case.

4. Where the patient "would be likely, unless operated on, to procreate a child or children who would have a tendency to serious physical, mental or nervous disease or deficiency."

Oh yes they also call on the founding fathers to back them up:

"When William Penn observed, "Menare generally more careful of the breed of their horses and dogs than of their children," his readers smiled and nodded, "How true! How true!" In the past two centuries we have come to learn just how true this observation is. We continue to quote William Penn and nod our heads but we no longer can afford to smile."

The important point in Dad29's comment was that the Bishop's did rally the troops and ended this practice, at least by state law. As they recently did in Louisianan and are continually working to end abortion both in and out of our two party system.

Dad29 pick up a copy of G.K. Chesterton's Eugenics and Other Evils.
Posted by Alan Capasso at 3:26 PM

Reason I mentioned the politics is b/c of the 180-degree reverse which occurred in the 1980's.

The (R) folk became the party of Life (more or less) and the (D)'s the Party of Death.

OK. and thanks for tuning in