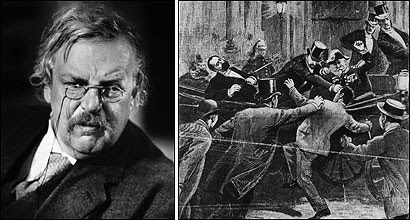 Last Thursday was the first meeting since May of the Rochester Chesterton group.

It’s one of some 22 local Chesterton groups in the U.S. listed by the American Chesterton Society. Maybe there are more out there that are just not officially listed yet.

I’m lucky enough to live near one. I had heard of it years ago, then stumbled across it again last spring and attended one meeting then.

There were about 20 people at the meeting – and some of the regulars were not there. It was largely male, but a few women were present. I hope more show up.

The Rochester Chestertonians are beginning a group reading of Orthodoxy – we made it through the first two chapters at the meeting.

I am a fan of Chesterton, but I am by no means an expert. I was impressed by the analysis that bounced around the room – with observations about history, philosophy, literature, the media, education, and more. It was a lively discussion (but not as lively as the picture above!).

I was humbled by the wisdom on display – all shared with good humor.

The meeting also included a recap of some of the talks at the Chesterton Conference last June. The recap reminded me of how jealous I am of people who can go to the conference. (Alas, it’s held at a time of the year when I, a teacher, simply can’t get free.)

My only complaint about last Thursday’s meeting: There were coffee and sweets available, but this is a Chesterton Society – where were the beer, ale and wine?!
Posted by A Secular Franciscan at 5:43 AM

Just letting you (and anyone who stumbles upon this old post) know that the Rochester NY Chesterton Society now has a website.