What "Old Glory" should mean

In the foreground, today, we see the tributes, prayers and solemnities of a nation afflicted, still grieving the loss that can not be replenished; tending to the wound that will not heal. In the background we see some two thousand years of conflict between East and West, between poverty and affluence, between tyranny and liberty, between turmoil and peace. We should not be so cynical as to think that America should be on the losing side of such conflicts, whether necessarily or incidentally, but nor should we be so jingoistic as to assume that she should necessarily be the victor. Anything worth having is worth fighting for, and the fight that America has found herself in is of dreadful importance. There have been successes, and there have been failures, and the latter have often outshone the former with their hideous and lustrous glare. The only way to respond to this is to strive on, as in Ecclesiastes, and for American to turn her hands to her travails with all her not inconsiderable might.

The dichotomy of modern remembrance and ancient struggle is a poignant one, and it is in this spirit that I show this: 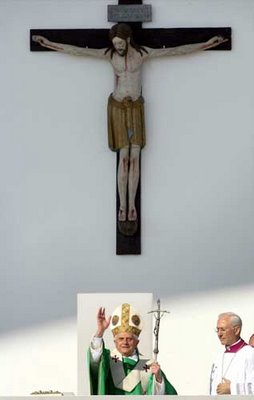 This is thought to be the oldest life-sized crucifix in the world, having been produced in or around the year 890AD. That's over a thousand years. Before the Crusades. Before the Cathari. Before Martin Luther. It looms in the background, a thousand curt and profound statements on thanatology, theodicy, crisis and love. It is the beating heart of the world. Before it - in the foreground - stands the Pope, the Holy Father of the Church that, being temporal, is necessarily a "modern tribute" to He who is the Ancient of Days.

There are few things simultaneously so modern and so ancient as the Mass, for it is a timeless novelty. It is a meeting of creator and creature, and it is a salve for men's souls. The howling , jagged emptiness that many people rightly feel on this day of days can not be filled by gloomy concerts and solemn words, and it certainly can't be filled by bluster and pride. It is not enough to merely preach America Alive and Kicking, for if she kicks against pricks it avails no one. C.S. Lewis cared well enough for the old hero when he was yet living, but when once Balder the beautiful was dead, was dead, there burst open before him the great expanse that is the summer field, that is Elysium, that is salvation. This is the Mass. It is to this that the afflicted, the angry and the despairing must turn if they wish to be healed.

So then, today of all days, neither presume America's invincibility nor despair of her sanctity. She's been in the rough before, and she will be again, but she remains, for all that, a diamond. Keep your eyes towards Heaven and your feet on the ground, for in the construction at Ground Zero could be heard the beating of the Sacred Heart, and in the songs of remembrance hymns of praise and awe. Could. Could! These are not roses that will grow and blossom in the soil of agony and revenge, of pride and ego. They require careful attention, devotion and spirit. They require humility, and that means an end to both arrogance and self-pity.

It can be done, and today's the day to start.
Posted by Nick Milne at 2:07 AM